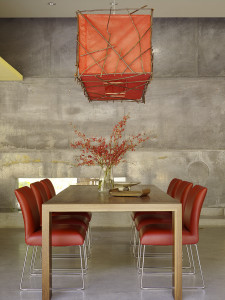 Natural materials artist David Ward liked to craft things from items found in nature from a very young age . His early creations included tree houses and tables of aspen and a rocking chair crafted from eucalyptus.

Few were surprised when as a teenager David announced he wanted to become a Landscape Architect. After gaining greater knowledge and experience working for nurseries and landscapers,  he started his own landscape construction and design firm in 1996.

More and more David was spending time – both for work and for play – outdoors. His ideas of form and design were being shaped by nature. He was drawn to designers like Noguchi and the Japanese tradition of including rocks, trees, and branches in interior spaces.

During this time, his interest in natural materials such as sticks, branches and bamboo deepened. While trimming trees and bushes, he became more interested in the trimmings. His yard became a giant pile of sticks and branches. Observing the long whips of fruit trees and the interesting patterns of scotch broom bark, he became obsessed with finding ways to attach them together. This exploration ultimately led to truly unique and organic finished pieces. 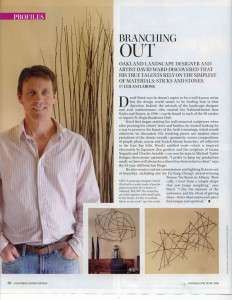 Now that David was creating beautiful works of art from natural materials, his awareness expanded to this trend in interior design. As his different interests merged into this exciting art form, David was particularly drawn to the design work of Michael Taylor and Ron Mann. A final seed was planted by the artist’s discovery of Charles Arnoldi’s work using branches. David was now well on the way in developing his own designs and techniques.

David has created and delivered hundreds of pieces to showrooms, and private clients around the country and continues to explore this medium with new materials. Along with his own creations, David is available for ideas and to create custom pieces incorporating client needs, ideas and visions. He lives and works in an artistic spiritual community near Nevada City in Northern California.

"David Wards delicate assemblages of twigs and branches are the perfect complement to the environments of Cheng Design.
He has a passion and sensitivity for making his art appropriate to the project. Our collaborations have rewarded us, as well as our clients, with wall pieces, light fixtures, and garden elements all done with subtle restraint and quiet exuberance." Fu-Tung Cheng, principal Cheng Design
"I love art in its many expressions! Magically my life has led me to expressing my self through the line and texture of a branch. I enjoy the relationship with the people who are drawn to this art and the process I go through to produce it. This web site is a window into my creativity." David Ward
"I have worked with David on many projects including custom fences, beautiful wall art, rock work for gardens and retaining walls, water features and beautiful furniture — all made of natural materials. I am always amazed at his creativity and the beauty and simplicity of his use of lines, shapes and emptiness. David uses native branches, rocks, hand made papers and other materials to harmonize indoors and out, simplicity and beauty, nature and spirit. It is rare to find an artist of such talent with the sweetness, integrity and ease of being that David provides. It is fun to work with him, and our homes and gardens are complimented by all who see his work. He has my highest recommendation." Satya'Ama Adyota, Spiritual Teacher and Conscious Living Advocate
"David's sensitivity to site and proportion are consistently spot-on and his artistry is inspiring. If you are looking to add a natural element to your interior, I would recommend that you contact David Ward!" Hills & Grant, Interior Design Firm